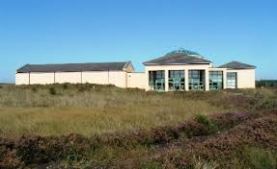 The Corlea Trackway (Irish: Bóthar Chorr Liath) is an Iron Age trackway, or togher, near the village of Keenagh, south of Longford town, County Longford, in Ireland. It was known locally as the Danes Road.

The trackway is situated in an area which is the site of industrial-scale mechanised peat harvesting by the Bord na Móna, principally to supply the peat-fired power stations of the Electricity Supply Board. While today a generally flat and open landscape, in the Iron Age it was covered by bog, quicksand, and ponds, surround by dense woodlands of birch, willow, hazel and alder while higher ground was covered by oak and ash. The terrain was dangerous and impassible for much of the year.

Part of the recovered trackway

In 1984, timbers recovered from Corlea were radiocarbon dated to the Iron Age, rather than the Bronze Age as had been expected, and an archaeological project was established under the leadership of Professor Barry Raftery to investigate the site before it was destroyed by peat-digging. Excavations to 1991 in Corlea bog revealed 59 toghers in an area of around 125 hectares and further work has raised the total to 108 with a further 76 in the nearby Derryoghil bog.

The majority of these toghers are constructed from woven hurdles laid on heaped brushwood on top of the surface, built to be used by people on foot. Four, including Corlea 1, the Corlea Trackway proper, are corduroy roads, built from split planks laid on top of raised rails and suitable for wheeled traffic. The Corlea Trackway is made from oak planks 3 to 3.5 metres long and around 15 centimetres thick laid on rails around 1.2 metres apart. The road was at least 1 kilometre long. Dendrochronological study suggests that the timber used in construction was felled in late 148 BC or early in 147 BC and the road built then. Raftery estimated that the sleepers alone amount to a 300 large oak trees, or a thousand wagon-loads, with a similar volume of birch for the rails. The Corlea Trackway ended on a small island, from which a second trackway, excavated in 1957 and since radiocarbon dated also to 148 BC, again around 1 kilometre long, connected to dry land on the far side of the bog. The construction of the roadway required a great deal of labour, comparable to that used in the construction of ritual monuments such as barrows.

The purpose of the Corlea Trackway is uncertain. For the smaller toghers, O’Sullivan remarks that “there is a growing sense that these were not structures designed to cross the bog, but to get into the bog”. Massive structures such as the Corlea Trackway may also have served to get into the bog, perhaps for ritual purposes, rather than merely to cross it. Whatever its purpose, the roadway was usable for only a few years. Gradually covered by the rising bog and sinking under its own weight, it was covered by the bog within a decade, and perhaps less, where it remained preserved for two millennium.

The Corlea Trackway, seemingly constructed in a single year, has suggested comparisons with the Irish language tale Tochmarc Étaíne (The Wooing of Étaín), where King Eochu Airem sets Midir tasks such as planting a forest and building a road across a bog where none had ever been before at a place called Móin Lámraige.

the above i have copied from Corlea Landmark … I couldnt coherently explain the place.

I dont know if anyone has ever visited here, its very beautiful, at the moment though there are problems as people are going there to dump their rubbish, which is extraordinary really. I have been there many times & bailey has run up and down the trackway! its a lovely place to visit, they also exhibit local Art students work in the gallery of the Corlea Centre, then there are resident Artists too Michael Casey has some bog oak sculpture’s there. Then in Kenagh village there is a lady named Breege She has an amazing shop, stocking all her fabrics & what caught my eye of course her Artworks!  Shes so so lovely a genuine soul so spiritual and aware I connected with her immediately. I always call in and talk to her! with bailey of course! Shes also an artist inspired by Corlea. Gosh i sound like a tour Guide. I have explored alot of the area over the past year,  when u reach a point in life i think u appreciate where u are from so much more, also the fact that I’m in recovery now, I see the World so differently Im blessed really. I Thought when I got into Recovery especially not drinking, (In Ireland with its serious drinking culture) that id be lost, but its the opposite i do things today id never have, at weekends its so so good to wake up fresh and not have a hangover. I wouldnt change it for the World.

Here is a piece I made the other day with heather i picked last year in Corlea,

(i did make one previously but i mixed it with gold leaf) The heather inside this one was also at a different time of year.

If u do get a chance pop over & visit Corlea i promise you will have a positive experience. x